Article Gallery Discussion
Leave a rating
Just a 25-minute ride away from Kamakura Station, Enoshima (江の島) is a small, sacred island dedicated to goddess Benzaiten, the only female god of the "Seven Lucky Gods". A 600-metre-long bridge connects the island with the mainland. Enoshima offers a lot of sights and places that make it worth spending a day there: the vast Enoshima-jinja consisting of three smaller shrines, a botanical garden, an observation platform, a hot spring with a terrific view, and an abundance of small restaurants specialised in shirasu, the most popular local fish variety.

The view of Enoshima from Cape Inamuragasaki. 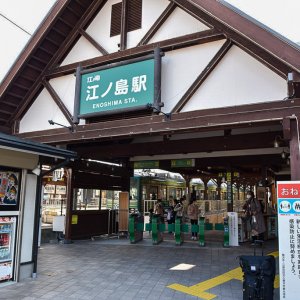 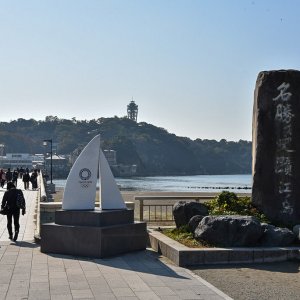 ​
It is just a 20-minute walk from Enoshima Station to the bridge constructed over the original sandbank. The eastern part of the island consists of the Enoshima yacht harbour and parking lots. In contrast, the rest of the island is covered by a grid of narrow pathways that lead up the hill towards Enoshima Shrine, past the customary souvenir shops and eateries. The island's southern edge consists of rugged cliffs and the Iwaya Caves that house the oldest Shintō shrine of Enoshima. 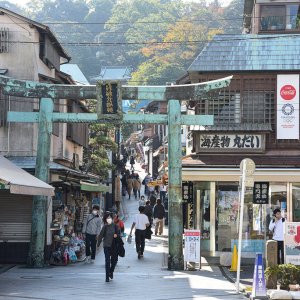 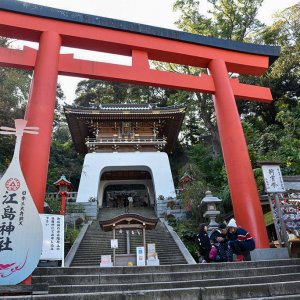 ​
The street passing under the bronze torii leads uphill through an area called Monzen-machi past restaurants, inns and omiyage stores to several staircases. While the stone stairs are easy to negotiate, visitors can also take three outdoor escalators up to the 46-metre high mountaintop (Enoshima Escar, daily 08:50 - 19:05, adults 360, children 180 JPY). The red torii at the end of the street marks the sacred precinct of Enoshima Shrine. 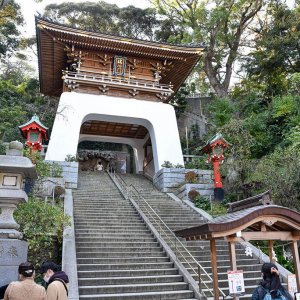 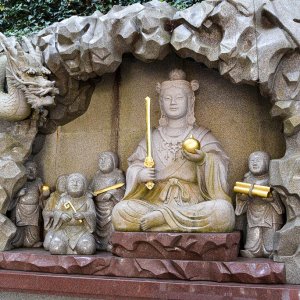 ​
Zuishin Gate (瑞心門 Zuishinmon) is the main entrance of Enoshima-jinja and a gatehouse modelled on the mythical Ryūgū-jō (竜宮城), the dragon's palace from the tale of Urashima Tarō. Passing the gate, visitors are greeted by a statue of Benzaiten (弁財天). 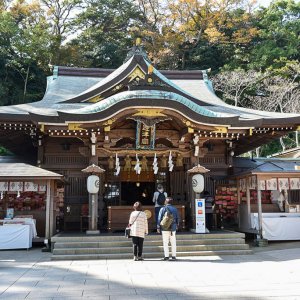 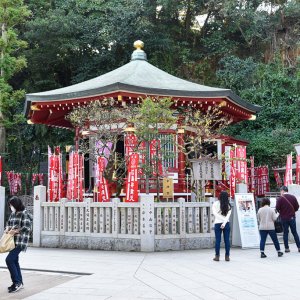 ​
The precinct encompasses several shrines that are considered more sacred the higher you ascend. The first shrine is Hetsu-no-Miya (辺津宮), the "Coast-side Shrine". It was founded in 1206 by Minamoto Sanetomo (源 実朝, 1192-1219), the third of the Kamakura shōgun, and is dedicated to the goddess Tagitsuhime. Next to Hetsu-no-Miya is Hoanden (奉安殿, "Treasure Hall"), an octagonal building modelled on the Yumedono at Hōryū-ji in Nara. It houses two statues of Benzaiten: the white Myoon-Benzaiten or Hadaka Benzaiten (裸弁財天, "Naked Benzaiten") with pronounced feminine characteristics and a biwa (琵琶), a Japanese lute with a short neck, and a statue of Happi-Benzaiten that holds weapons in each of her eight arms. It is said that Minamoto no Yoritomo, the first Kamakura shōgun, donated Happi-Benzaiten in 1182 (admission 200 JPY adults, high-school students 100 JPY, children 50 JPY, 08:30-16:30). 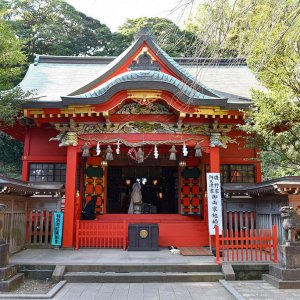 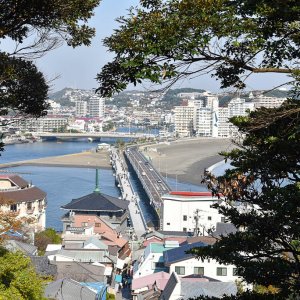 ​
Nakatsunomiya Shrine (中津宮, "The Shrine in the Middle") was built in 853 by the Tendai priest Jikaku Daishi (慈覺大師), also known as Ennin. It enshrines the god Ichikishimahime. The syncretism of kami and buddhas had started with the advent of Buddhism in the 6th century and lasted until 1868. Initially, Nakatsunomiya Shrine held the statue of Happi-Benzaiten. It was reconstructed in 1689 in its current crimson-coloured style typical for the Edo Period. 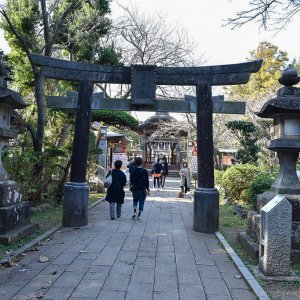 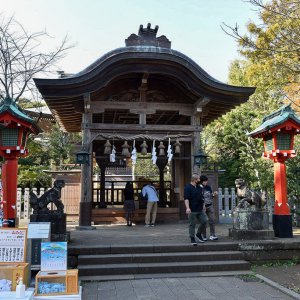 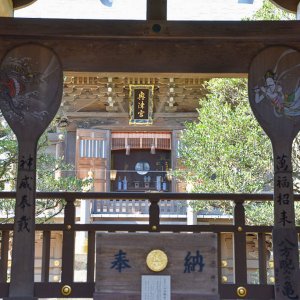 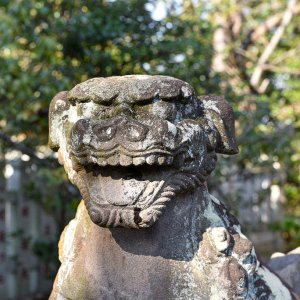 ​
According to legend, Tagirihime lives at Okutsu-no-Miya in the summer and spends the winter in the cave underneath the shrine. The ceiling of the oratory is decorated with a painting of the giant turtle Happo Nirami no Kame. Yoritomo also donated the stone torii. 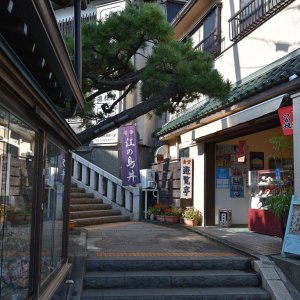 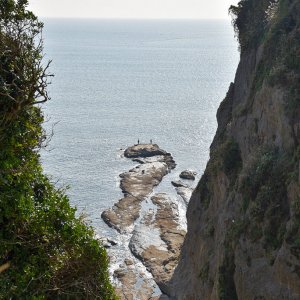 ​
Left: Oiwaya-dō-dōri (御岩屋道通り). The location displayed in the right photo is Yama-futatsu (山二つ), a boundary that divides Enoshima geologically in two. It is said that over the ages, tides eroded the area along with the geological stratum and formed a large cave. When the cave collapsed, it formed Yama-futatsu. 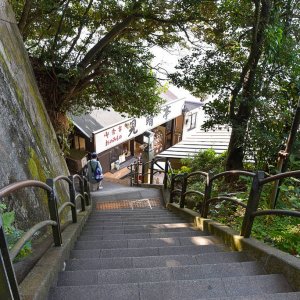 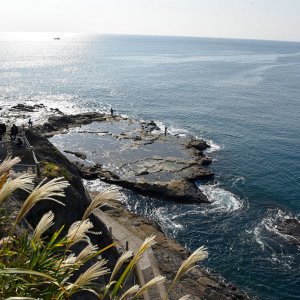 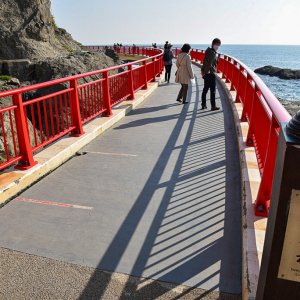 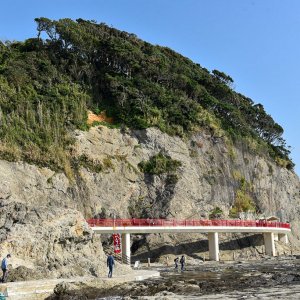 ​
On the southern edge of the island, 220 stairs that were carved in the stone lead down to the shore and the Enoshima Iwaya Caves (江の島岩屋). The first cave is 152 metres long and contains Shintō deities and several Buddhist statues. The second cave (56 metres) was home to the Dragon God, the protector of the fishermen. 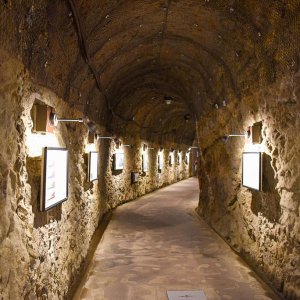 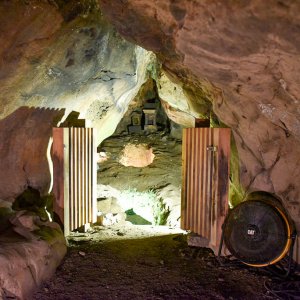 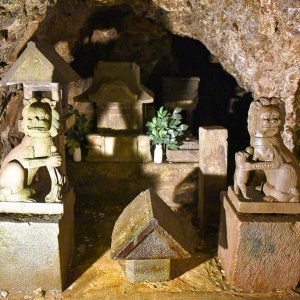 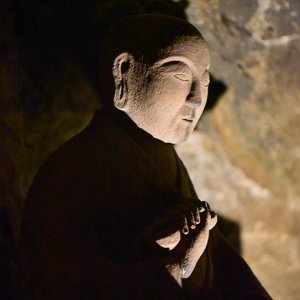 ​
The photos above show the "birthplace" of the Enoshima Shrine as well as a statue of Kōbō Daishi (弘法大師), aka Kūkai (空海). It is said that the cavity in front of the "birthplace" is connected to the Narusawa Ice Cave (鳴沢氷穴 Narusawa Hyōketsu) in Aokigahara forest at the foot of Mount Fuji. The oblong rock on the left side of the shrine is said to depict Nichiren Shōnin (日蓮聖人) in lying posture. 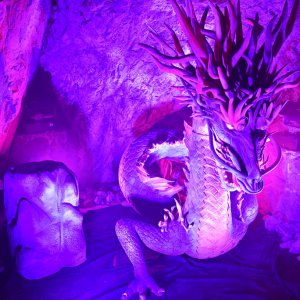 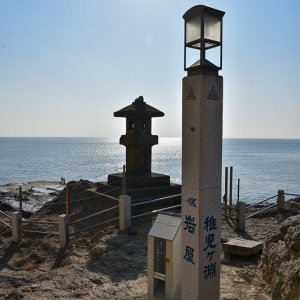 ​
The second cave houses a fanciful statue of the Dragon God. To the right: a stone monument commemorating Nagase Hatenro (永瀬覇天郎), a local haiku poet from Fujisawa. It is called Chigokafuchi (稚児ヶ淵), a monument to a tragic love affair that was not meant to happen: Jikyu, a novice at Kencho-ji temple, was on his way back from a hundred-day pilgrimage when he met Shiragiku, a servant (稚児 chigo) at Sojo-in and fell in love with him. However, harassed by the other monks, they decided to commit love-suicide by throwing themselves into the sea. Their story later became the subject of a popular kabuki drama. Nagase Hatenro's haiku is dedicated to the two unfortunate lovers.