Article Gallery
Leave a rating
Emperor Meiji (明治天皇 Meiji-tennō, born Mutsuhito, 3 November 1852 – 30 July 1912) or Meiji the Great was the 122nd emperor of Japan according to the traditional order of succession, reigning from 3 February 1867 until his death. He presided over a time of rapid change in Japan, as the nation rose from a feudal shogunate to become a world power. His name was Mutsuhito (睦仁), and although outside of Japan he is sometimes called by this name or Emperor Mutsuhito, in Japan deceased emperors are referred to only by their posthumous names.

At the time of his birth in 1852, Japan was an isolated, pre-industrial, feudal country dominated by the Tokugawa Shogunate and the daimyō, who ruled over more than 250 decentralised domains. By the time of his death in 1912, Japan had undergone a political, social, and industrial revolution at home (“Meiji Restoration“) and emerged as one of the great powers on the world stage.

Born just eight months before Commodore Matthew Perry and his black ships came to ask the opening of Japan to foreign trade, the future emperor Meiji was not originally destined to reign. Son of Emperor Komei and the lady-in-waiting Nakayama Yoshiko, he received the title of Sachi no Miya (Prince Sachi). Not until his adoption in July 1860 by Asako Nyogo (later Empress Dowager Eisho), the principal consort of Emperor Komei, was he made officially Crown Prince (kotaishi) and Imperial Prince (shinno).

After the Satsuma and Chōshū rebellion, 15-year old Mutsuhito was to ascend the throne as the monarch of the newly established Meiji government (see Meiji Restoration).

Emperor Meiji’s role in the affairs of the state remained limited, as he delegated most of his power to a group of oligarchs known as the genrō (elderly statesmen), such as Ito Hirobumi or Yamagata Aritomo.

Emperor Mutsuhito died in 1912 and was succeeded by his son, Yoshihito. Uchida Kuichi was the only photographer granted a sitting by Emperor Meiji, and in 1872 Uchida photographed the Emperor and Empress Haruko in full court dress and everyday robes. In 1873, Uchida again photographed the Emperor, who this time wore a military dress, and a photograph from this sitting became the official imperial portrait (Ishii and Iizawa). Copies of the official portrait were distributed among foreign heads of state and Japanese regional governmental offices, but their private sale was prohibited. Nevertheless, many copies of the photograph were made and circulated on the market. (Source: Wikipedia) 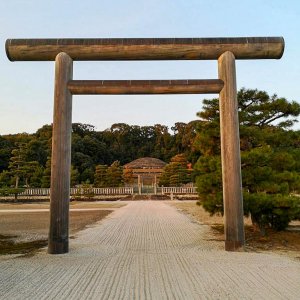 Momoyama Imperial Mausoleum in Fushimi, the tomb of Emperor Meiji (click to enlarge).

Next article in series Emperor Taisho