Register Log in
Article Gallery
Leave a rating
The Chūbu Region (中部地方 Chūbu-chihō) is the central part of Japan’s main island Honshū and consists of three subregions, Hokuriku on the Sea of Japan, Kōshin’etsu, the Central Highlands, and Tōkai on the Pacific Seaboard, encompassing the following prefectures: 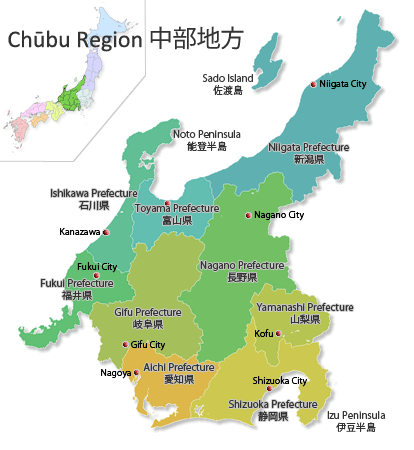 Map of Chūbu Region
The geographical divide of the subregions is not so clear. Niigata is sometimes placed in the Hokuriku Region, sometimes in the Kōshin’etsu Region. Likewise, Aichi Prefecture is either described to be a part of the Tōkai region or the Chūkyō region (中京地方 Chūkyō-chihō), the major metropolitan area centred around Chūbu’s principal city of Nagoya, a regional hub, the third-largest incorporated city and the fourth most populous urban area in Japan. Southern Gifu is part of the Tōkai region, while the rest of the prefecture belongs to Kōshin’etsu.

The Chūbu region is mostly a mountainous region dominated by the Japanese Alps (日本アルプス Nihon Arupusu), namely the Northern Alps ((北アルプス Kita Arupusu, also known as the Hida Mountains 飛騨山脈 Hida Sanmyaku), the Central Alps (or Kiso Mountains, 木曽山脈 Kiso Sanmyaku), and the Southern Alps (or Akaishi Mountains, 赤石山脈 Akaishi Sanmyaku), lying in a generally north to south alignment. It contains numerous volcanoes, including Mount Fuji (富士山 Fuji-san), 3,776 meters), the highest peak in Japan, and some of Japan’s longest rivers: the Shinanogawa, Kisogawa, and the Tenryūgawa. The Niigata Plain on the Sea of Japan coast is one of the largest rice-producing areas in Japan, and the Nōbi Plain on the Pacific coast is the most densely populated and highly industrialised area in the region. Numerous inland basins, such as the Nagano, Matsumoto, and the Takayama basins have very cold winters. The Pacific side is generally mild, and the Sea of Japan side has long snowy winters.

The Nōbi Plain and other plains of the Hokuriku Region are essential rice-producing areas. Shizuoka Prefecture is Japan’s major tea-cultivating area and also produces a large crop of mandarin oranges as well as strawberries in early spring. Grapes and peaches in Yamanashi Prefecture and apples in Nagano Prefecture are important products, too. Fishing is of great import along all coastal areas.

In 1966, the Chūbu sphere (中部県 Chūbuken) was designated as a wide-area economic bloc encompassing the greater part of Chūbu Region and part of Kinki Region, to establish stronger economic ties between the Hokuriku and Tōkai regions.

Nagoya is an international airport (code: NGO) and is linked by direct flights to many major cities around the world, and via transfers at Tokyo Narita and Osaka Kansai airports to many more. Given the cost of transport in Japan, consider flying directly to Nagoya, if you are going to be based in the area unless you want to go to Tokyo or Osaka.

If coming by train, the main Tokaido line runs through Nagoya, and all trains stop here. Shinkansen trains leave Tokyo and Osaka for Nagoya every few minutes throughout the day, and you do not usually need to reserve except at peak times or holidays. By road, the main Chuo Expressway runs through the city. From here, you can access the regional network of trains and roads that will get you to any part of the Chubu region easily and quickly.

From Nagoya, there are ferry boats that run via Osaka, through Naha, Miyako, Ishigaki to Chilung and Kaohsiung in Taiwan. Another ferry from Nagoya runs to Sendai and then Tomakomai in Hokkaido. On the north coast, there are ferries from Naoetsu, Teradomari and Niigata to Sadogashima, and from Hakata (near Fukuoka) to Hokkaido via Naoetsu. 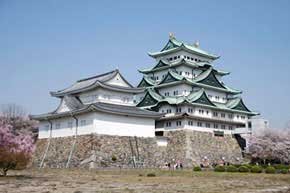 Chūbu, like the rest of Japan, has two basic weather patterns within it. The north (Japan Sea) coast and the south (Pacific Ocean) coast are entirely different. The north shore has much more severe winters, not having the Japan Alps to shelter behind. This means much higher snowfall and slightly lower temperatures in winter, while rainfall is similar in the summer (all parts of Japan experience typhoons). Sunshine during the summer is very similar, but the winter snow clouds blot out the sun on the north coast.

The Chūbu region also has a lot of high ground, adding a third weather pattern. Nagano and some parts of Gifu, in particular, are located at a very high elevation, and this brings with it colder weather, but also lower rainfall as the effects of typhoons are not felt so severely at the highest parts of the region. Although it has a lot of snow, Hokkaido to the far north of Japan has a much higher snowfall and more reliable snow for skiing – although lack of snow will almost never be a problem in either location. 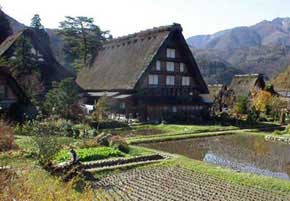 Gasshō-zukuri (合掌造り
in Shirakawa, Gifu Prefecture
Find a brief list of some of the main sights around the Chūbu Region below. 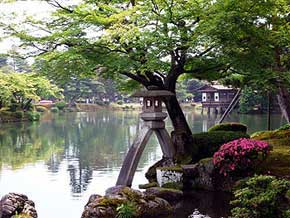 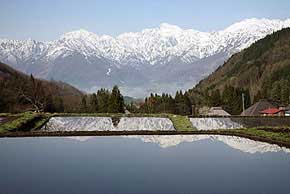 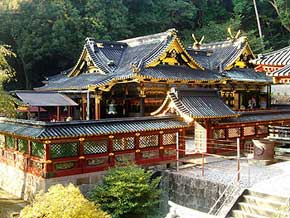