Article Gallery
Leave a rating
Aizuwakamatsu (会津若松市) is a city in western Fukushima Prefecture, northern Honshū, and the most important city in the Aizu basin, with a population of about 125,000 residents.

Established as a castle town of the Aizu Domain (会津藩 Aizu-han) in 1592, much of the city burned in the Boshin Civil War (1868-69) in the wake of the Meiji Restoration. Famous for its lacquerware, the city also produces sake, textiles, lumber, and furniture.

Aizuwakamatsu takes great pride in its samurai past and its history of martial arts, as well as its ties with the Tokugawa clan. The Hoshina clan (保科氏), who later ruled the Aizu Domain, adopted the illegitimate son of the second Tokugawa shogun Hidetada and thus expanded their influence, and were in the of the seventeenth century bestowed the privilege to use the Tokugawa kamon (家紋, family crest) as well as the surname of Matsudaira. In the 1860s, the Matsudaira served as Kyoto Protectors (京都守護職 Kyōto Shugoshoku); they opposed the reinstatement of the Japanese emperor and were declared “enemies of the court”. The Aizu forces and their allies were eventually defeated by the technically superior armies of the Satsuma-Chōshū Alliance in the Boshin War.

Getting around in Aizuwakamatsu is very convenient, either by bicycle or by bus. The Aizuwakamatsu Classic Town Bus leaves quite frequently from the JR Station and goes either clockwise (“Akabe“, a modern bus) or anti-clockwise (“Haikara-san“, a vintage-type minibus). One ride is 200 JPY for adults and 100 JPY for children. Day passes are available for 500 JPY and 250 JPY. 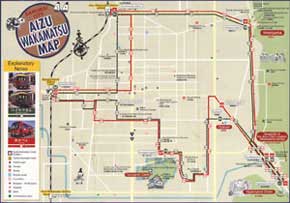 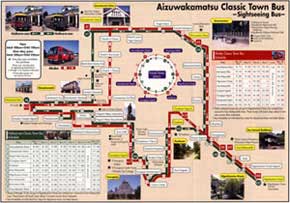